The upcoming Stargate release brings the highly anticipated IBC capabilities to the Microtick chain, and some exciting new features as well.

With the new Stargate SDK release Microtick now supports token deposits and withdrawals from other chains that also support IBC. Multiple relayers can relay packets between chains. Gone are the days where a trusted bridge was necessary to transfer backing tokens on- or off-chain. In addition, there is no KYC requirement for IBC transfers, or any limitation on the size of deposits or withdrawals.

In addition to backing token transfers over IBC, any Microtick account can now transfer TICK tokens off chain to trade on an Automated Market Maker or DEX.

IBC tokens have a naming mechanism based on the port / channel and their denomination on the originating chain. This results in token denominations on the receiving chains that look like:

This mechanism is described in more detail here: https://docs.cosmos.network/master/architecture/adr-001-coin-source-tracing.html

Once a channel has been set up between a source chain and Microtick, the Microtick governance community can switch to a new backing token denomination by proposing and passing a Backing Denom change proposal. Upon successful passage, the following changes take effect immediately:

The community can now dynamically add new markets without having to stop and restart the chain. With a successful vote, the new markets become available automatically for trading upon proposal passage. Each market must have a name and description. No structure or naming convention is enforced by the governance mechanism itself; proposal curation is assumed to have been provided by the community through the proposal process.

With the Stargate update, all quotes have implicit bids associated with them where market makers must "buy back" quotes that disagree from the consensus. The default bid premium is zero, meaning all quotes that are at the consensus price will have bids of zero premium (a riskless trade for the market maker if someone decides to sell into the quote). As the consensus moves away from the quote's spot, the bid premium adjusts in the same way asks premiums do (with a linear delta of 0.5).

While the default bid price is zero, market makers can optionally create a quote with a bid greater than zero. Market makers can do this is they want to buy premium, but not at the ask price on the market.

Because bid premiums do not inherently back quotes, there is no way to create a bid without the associated ask. Bids must always be less than the ask price of a quote, and quote weights post-Stargate are computed as backing / average premium, where average premium is bid + ask / 2.

The addition of bids to the marketplace creates the ability for traders to create option combo positions. The most common of these are synthetic long and short positions. With Microtick Stargate you can now query synthetic prices and trade synthetic positions directly without having to buy / sell the individual option legs independently.

To query synthetic bids and asks from the CLI:

Trading a synthetic position is identical to trading an option, but uses the keyword "syn" instead of "call" or "put". The profit / loss of a synthetic position is identical to buying or selling the underlying asset, over the time duration of the position - except you don't have to pay the strike price. (You do have to put up token backing for the short leg of the position, which is refunded to you at trade settlement if the trade moves in your direction)

The previous version of Microtick had TICK rewards based directly on the amount of commissions paid. Microtick Stargate calculates TICK rewards based on the amount of backing for quotes, and based on a fixed rate for trades (default 0). These are specified in the genesis file and independently adjustable through governance. This will allow for much better fine tuning of TICK rewards, similar to the way there are separate commissions for various transactions:

With Microtick Stargate we introduce the concept of an adjustment factor that is used to dynamically adjust commissions and TICK reward based on how competitive a quote's premium is in the marketplace.

Every quote placed, updated or deposited (add backing to) is subject to an adjustment factor. This is calculated based on the ratio of the quote's spread to the inside spread as shown in the diagram below. 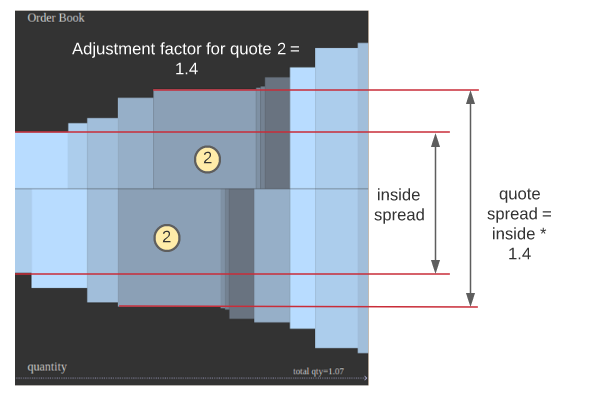 In order to pay the base commission amount specified in the genesis file, a quote's spread must be equal to or less than the inside spread (if less, then the minimum adjustment factor is always 1, or no adjustment)

If market makers see an inside spread that seems too low for market conditions, it will be better in some circumstances to trade the quotes off the market in order to maintain a fair adjustment factor in the order book.

The previous version of Microtick allowed the backing of stale quotes to be claimed by any Quote Cancel transaction. With the Stargate release, quote cancellation has a slash rate (default 1%) where the transaction signer claims 1% of the backing and the rest is returned to the quote provider. This rate is adjustable through governance.